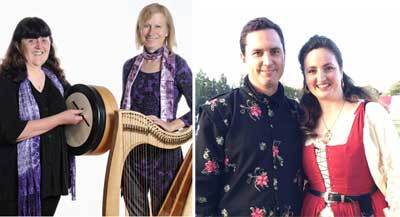 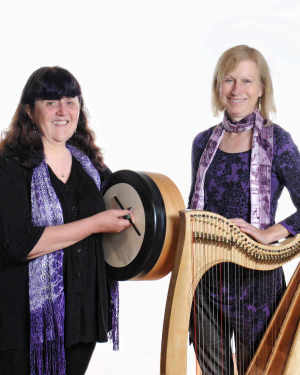 Celtic Caim are Heather Innes & Pauline Vallance from Scotland and Ireland. Heather and Pauline’s voices blend beautifully, and they take turns singing lead and harmony vocals. Though they enjoy singing a‘Capella in harmony, Pauline accompanies most of their songs on the Clasarch (Celtic harp) and occasionally with her flute while Heather adds a steady bodhran beat here and there. There are also a few lively tune sets on flute and bodhran to get your toes a tapping!

Most of Pauline songs she has written herself and she has won awards in Scotland for her songwriting, which covers many themes from a hazardous troika ride through Siberia to the story of a mill worker at Scotland historical Merino Mill. Heather writes the occasional song but mainly has an eclectic set of songs she collected in Ireland and Scotland and on her travels abroad.

As well as singing in the Caim trio for concerts and festivals, Pauline and Heather have given Celtic Caim concerts in England and Scotland and toured in Ontario, Canada and NSW and Queensland, Australia.

Heather has sung at folk clubs, festivals and concerts in the UK, Germany, Denmark, USA, Canada, Thailand and Australia, solo a’Capella and with various musicians for nearly 30 years and is a regular visitor to the recording studio with a number of solo albums and combination albums with other singers under her belt.

“Heather has one of those voices…timeless and highly evocative…an uplifting and refreshing experience” John O’Regan, freelance journalist and broadcaster, Ireland.

Pauline has played flute for many years, in orchestras and in folk sessions. She was introduced to the clàrsach in 2007 which then inspired her to start writing songs.

In 2009, she was a prize winner at the Glasgow Songwright Festival and she has played a number of folk festivals and clubs in Scotland and northern England. She also plays regularly at writers' events, including the UNESCO City of Music Day in Glasgow. Pauline loves the challenge of playing a variety of venues. Her Edinburgh Fringe concert “Travels with my clàrsach” resulted in a gig at Glasgow Airport International Departures Lounge!

In 2011, Pauline recorded her first CD of her own songs and she has also recorded a CD of Scottish Lullabies (thanks to Enterprise Music Scotland), called 'Golden Slumbers'.

As well as performing solo, in orchestras and with Caim, Pauline plays, sings and records in duo Witches Brew, Tomfoolery band and The Fusioneers. 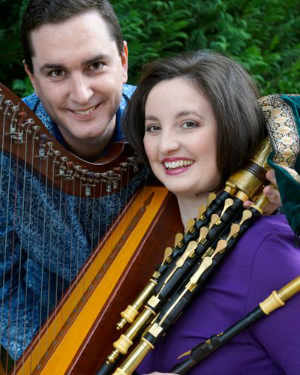 Folk music duo Chloe and Ben Hurley perform traditional Irish songs and instrumental music on iconic Irish instruments including Celtic harp and Uilleann pipes. Chloe’s voice has been described by audiences as “a feast for the soul”. As life-long musicians with a shared Irish heritage Chloe and Ben discovered their passion for Irish music soon after they met. Recent performances include Kiama’s Folk by the Sea, the National Folk Festival, Yass Celtic and Irish Music Festival , Crookwell Potato Festival, Blacktown Medieval Fayre and annual performances at Winterfest in the Hawkesbury.

From ethereal soprano airs to toe tapping jigs and reels Chloe and Ben take you on a journey that evokes the wild beauty of Ireland which inspires this gorgeous music.

"Lovely, charming, quirky songs that made me smile.  If Jonathan Richman was a Scotswoman who played a clarsach, this is how he'd sound" - Tom Clelland, Clydesdale Folk Club

“Heather has one of those voices…timeless and highly evocative…an uplifting and refreshing experience”- John O’Regan, freelance journalist and broadcaster, Ireland.

"Such a beautiful performance. Thanks for joining us on Wesley Impact! TV." - Wesley Mission (NSW Australia)

"Everybody loved your music last year and I so looking forward to doing it again". - Melissa Frances Clinton, (Kuranda Riverboat, Qld.)

"Chloe & Ben exude joyful love of Traditional  music during their colorful performances. Chloe & Bens sensitive interpretation of song is a delight to hear." - Janno Scanners from the Yass Irish and Celtic Music Festival