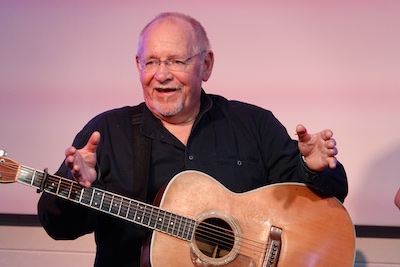 On Monday 11th June we had a very special private concert here at Humph Hall with the legendary Eric Bogle plus the hugely popular Ami Williamson - what an evening!  :-)

Eric Bogle AM (born 23 September 1944) is a Scottish folk singer-songwriter. Born and raised in Scotland, he emigrated to Australia at the age of 25, to settle near Adelaide, South Australia. Bogle's songs have covered a variety of topics, and have been performed by many artists. Two of his best known songs are "No Man's Land" (or "The Green Fields of France") and "And the Band Played Waltzing Matilda", with the latter being named one of the APRA Top 30 Australian songs in 2001, as part of the celebrations for the Australasian Performing Right Association's 75th anniversary.

Ami Williamson - A trained singer/pianist and graduate of the Sydney Conservatorium of Music, Ami Williamson has been performing in her own right for many years after her father – country music’s John Williamson – first took her out on the road as a teenager.

Ami’s experience as a performer has extended far and wide since her graduation from the Sydney Conservatorium of Music – in addition to playing Festivals across Australia, she was invited to entertain troops in the Solomon Islands, Iraq and Afghanistan. She’s not just a talented singer and songwriter, her incredible talents also extend to playing the piano, drums and dulcimer.

"Eric Bogle has written many iconic songs that deal with the futility and waste of war. Two of these in particular, ‘And the Band Played Waltzing Matilda’ and ‘No Man’s Land (a.k.a. The Green Fields of France)’, have been recorded numerous times in a dozen or more languages indicating the universality and power of their simple message. Bogle’s other compositions about the First World War give a voice to the voiceless, prominence to the forgotten and personality to the anonymous as they interrogate the human experience, celebrate its spirit and empathise with its suffering." - Michael J. K. Walsh

"There’s enough variety in the talents of Ami Williamson to keep milk fresh for centuries." - SMH

"Ami has created something that’s not quite country, not quite folk, not quite classical and not quite pop, but an exciting mix of all of the above and more." - Sunday Arts ABC

"She’s toured Australia several times over. She’s graduated from the Sydney Conservatorium of Music and Ensemble Acting Studios. Daughter of Australian music legend John Williamson, Ami is an artist in her own right and bringing audiences to their feet!" - The Canberra Times